Every system has key elements. A leadership system has three: 1) workforce, 2) financial resources, and 3) knowledge & information. I recently witnessed the difference between managing these elements vs developing them. The difference is of a seismic scale.

Seattle’s Virginia Mason Medical Center is a system of multiple hospitals and clinics. They are one of the top hospitals in America. For example, they are:

Few health care organizations in the world can match this record of consistent long-term performance. As but one example of developing vs managing their key leadership elements, every Friday afternoon, they hold a series of “report outs”. These are exactly 5-minute reports on recent Kaizen or Rapid Process Improvement Workshops. The name would suggest a simple after-action report. Hardly the case. Each report out is part of an integrated approach to developing each of these critical elements. For example:

Developing Workforce. Report outs are done by two participants of each workshop but not the leader. They want to develop public presentation skills of their workforce, so it is the rank and file that do the report outs. Leaders giving the presentation robs staff of the challenge and opportunity for self-improvement. Staff giving their first report out presentation are acknowledged. In my observation, the Chief of Staff was the senior executive and he warmly acknowledged one woman giving her first presentation.

Creating More Value from their financial resources. As the first health care system in the world to adopt the Toyota Production System they are all about eliminating waste. Eliminate waste and more resources flow to patient value. Since adopting TPS the time nurses spend interacting with patients has gone from 35% to 90%.

Developing New Knowledge & Information. As processes are improved and redesigned the knowledge is immediately operationalized and distributed throughout the system. Systems are not improved in isolation, but in collaboration with other systems for total system improvement.

For this health care system, with a long-term record of delivering outstanding patient care, managing is not enough. Developing their key system elements is a heart beat that throbs throughout their leadership system. 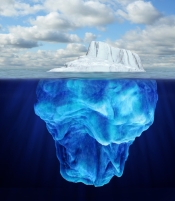 I was just re-reading David Peter Stroh’s book, Systems Thinking for Social Change, and was reminded of the iceberg as a metaphor for a system. 90% Of an iceberg is what lies below the surface of the water. It cannot be seen but the Titanic lies at the bottom of the Atlantic Ocean because of it. The purpose of a leadership system is what lies below the surface of the water. Outside observable behaviors of individual leaders, it cannot be seen. Though hidden, its power is incalculable. The size of its mass relative to what can be seen, gives us an understanding of its power.

Most organizations try to manage the enterprise by controlling the elements and to some degree the interconnections. But unfortunately, they are trying to control 100% of the iceberg by focusing on 10% of the mass. The math does not work. Organizations would be far more successful by focusing on the 90% of the iceberg. For leadership, this means identifying the systems purpose. Once this is set, everything else will fall into place.

According to Donella Meadows in her ground breaking work, Thinking in Systems, a A primer, every system has a purpose or chief function.  the system produces something of value, an intended results.

In a conversation with Colonel Marc Gauthier, a 34 year veteran of the United States Army, Army Ranger and Special Forces, I asked: what is the primary function or purpose of the leadership system for the Army? After some clarification, he thought for a moment and referenced General Mark A Milley, current General of the Army, the highest ranking officer and CEO equivalent of the Army.

On August 7, 2015 General Milley accepted the appointment and outlined his priorities. The first two might be expected from an Army General:

Care of the Troops: (Always) Every day we must keep foremost in our minds our Soldiers, Civilians, and their Families. Our collective strength depends on our people—their mental and physical resilience is at our core. We must always treat each other with respect and lead with integrity. Our Soldiers are the crown jewels of the Nation; we must love them, protect them, and always keep faith with them.

A system purpose can be tangible like the circulatory system pumping blood and delivering nutrients, gas, and hormones to the body. It can also be intangible like a leader serving her subordinates. This purpose or function is the “why” leadership exists. It is the reason why a leader gets up on the morning. It is the way individual leaders see themselves delivering maximum value to customers and stakeholders. General Milley was simply restating what every commissioned and enlisted officer knows from the first day of training – the job of a leader

is to love his men (and women), it is to care for them, and always keep faith with them.

On October 14, 2013, Captain William Swenson received the nations highest honor – the Medal Of Honor. This is his story, of how he fulfilled General Milley’s priority – of loving a soldier.

Edwards Deming put this title in a different way: Every system is perfectly designed to get the results that it does. Therefore, when Seattle Swedish Hospital’s, Neurological Institute changes surgeon’s compensation formula from one where revenues were shared to one that compensated surgeons on production, they received exactly what the system was designed to produce. Surgical production went up, collaboration when down, safety went down, and a new age of internal competition was born.

This according to a 4-part expose that was published in 2017 by the Seattle Times. As a result, the CEO of Swedish Hospital resigned, and the director of the Institute lost his license to practice in the State of Washington. The final result will be determined by the courts. It will take a generation to heal the scars.

Deming is also often quoted as saying: I should estimate that in my experience most troubles and most possibilities for improvement add up to the proportions something like this: 94% belongs to the system (responsibility of management) 6% special events.

Dr. William Tate, one of the early pioneers in systemic leadership uses the analogy of a fish tank. The traditional model of leadership is one that occasionally pulls the fish out of the tank for training and then sends them back into a toxic tank. The result is little if any change. Better to change the tank (the leadership system).

In our contemporary age, most of us understand the role of processes. Processes are what takes the raw materials of production, whether they be aluminum ingots or knowledge of the human brain and turns them into a soda can or the removal an aneurysm. But a cousin to processes are routines. Routines are tasks and activities that are regular patterns of human behavior. For a leadership system, routines and processes are part of what makes leadership – a system.

A conversion with a the director of a level 1 trauma center revealed a simple, but important routine. The current CEO of the hospital regularly rounds to each department, including the trauma center 2-3 times a week. In doing so, he learns the names of physicians and nurses. He learns their concerns, what they like about the job and what frustrates them. He invites 2-way communication and dialog. He learns in real time any potential labor challenges that might be on the horizon. Consequently, trust and respect for the administration is high. Senior leaders, following the lead of the CEO do the same. A culture of mutual respect and trust grows.

Contrast this with executive leaders who lead from the sanctum of their office. Out side of direct reports, there is no relationship. For this type of leader, trust and respect of the workforce is probably not a priority.

Processes and routines are also the bank of organizational knowledge, skills, and experience. They serve as organizational memory. Procedures are changed and turned into new routines and processes because experience and data says there is a better way. Innovation occurs when existing processes are modified, reorganized, and streamlined. For the leadership system, processes and routines need the same kind of continual evaluation as an intricate surgical procedure. Annual strategic planning needs continual review and the process itself to make it more effective. Communication between senior leaders and front line staff always needs improvement. Routines that encourage and build 2-way communication yields enormous value.